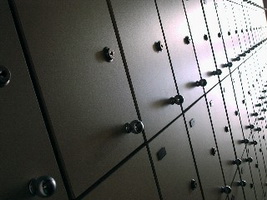 iMenu400 allows you to create a personal environment for each user on the AS/400, giving him/her easy access to authorised applications.

iMenu400 gives a user up to 15 group jobs allowing him/her to run enquiries, control output etc. without interrupting the current task, and without leaving the screen.

iMenu400 can be tailored to your own wishes by means of a command line on the iMenu400 menus, the Attention key action, the use of the fast path option, the signoff user exit programs and the possibility to adjust your screen lay-out.

In June 2009, SRC Secure Solutions introduced the successor to the user access application Menu/400, renamed iMenu400. This entirely modernized version has many new functions. Using iMenu400organizations can regulate, organize and document employee access to software applications faster and much more efficiently. This process is especially useful when temporary staff require access to applications. The documenting function also assists in complying easily with the large and growing number of laws and regulations for security compliance imposed on organizations. In the past few weeks, the new version of iMenu400 has been successfully launched at a number of SRC's major customers.

As users will know IBM stopped supporting APD/400 at V5R3 of i5/OS. The software continues to work on the system until V6R1 is installed. The good news is that iMenu400 is a tried and tested alternative for APD/400 and it is compatible with V6R1 and higher of i5/OS.

Interested APD/400 users will be able to test iMenu400 by downloading a trial version here. (Log in required).. Contact us for a quote, you will be pleasantly surprised.

iMenu400 offers an organization an affordable solution for defining an access policy to their i5 environment. Access to applications or modules can be secured, and the maintenance of user profiles made simple and secure. Many companies use Menu/400 to structure and organize access to applications on i5-systems for employees and temporary users.

The first version of the application was developed during the nineties and since that time it has been utilized by organizations in many different sectors. In Menu/400, users are granted authorized access to applications (or parts thereof) by means of dynamic menu's. In this way, a sales assistant in a certain country can be granted access to the sales module and to the CRM administration of that country, and a bank employee in the head office can be granted access to all relevant applications of the banking system of the various countries. Over the years, Menu/400 has been further enriched with new functionality. Also thanks to the recent sale of Menu/400 to a number of international companies and organizations, many new functions have been added to Menu/400 in the past months. The requirement to further develop Menu/400 originated in part from further internationalization of the client base and partly in response to the multitude of new laws and regulations for security compliance with which companies and organizations are faced nowadays. These new developments earned the application the new name of iMenu400.

Due to international implementation iMenu400 now has the standard possibility to authorize users both centrally and locally. The maintenance of access authorization has been divided into a number of access layers, so that companies and organizations using iMenu400 can maintain the authorization of users in a structural and organized way. In view of the laws and regulations for security compliance, such as SOX, J-SOX and Basel II, iMenu400 offers the possibility to segregate access maintenance and approval over two or more persons, and to automatically document any modifications.

iMenu400 has been further enriched with the possibility, to be able to choose how menu's and options are presented to the user. The appearance of the user interface has also been improved and modernized; of course without affecting the performance and ease of use. At the same time, the documentation has been updated with a detailed description of the new functions. iMenu400 is available for i5/OS V5.4 and above including of course V6R1. During the first half of 2010, a new version of iMenu400 will be released including more improvements and functions, mainly based on new user requirements.

The introduction of iMenu400 has lead to its implementation in various sectors all over the world. IMenu400 is used by a large number of international financial institutions, by importers and distributors, and by internationally operating trading companies.